Entering his sixth season as Music Director of Strings Music Festival, Michael Sachs enjoys a multi-faceted career as a performer. Sachs joined The Cleveland Orchestra as Principal Trumpet in 1988. Praised by critics for his “spectacular chops” and “radiant tone,” he is recognized internationally as a leading soloist, recitalist, chamber musician, teacher, author, and clinician. Celebrating his 31st season with the orchestra, Mr. Sachs is the longest serving Principal Trumpet in the history of The Cleveland Orchestra. 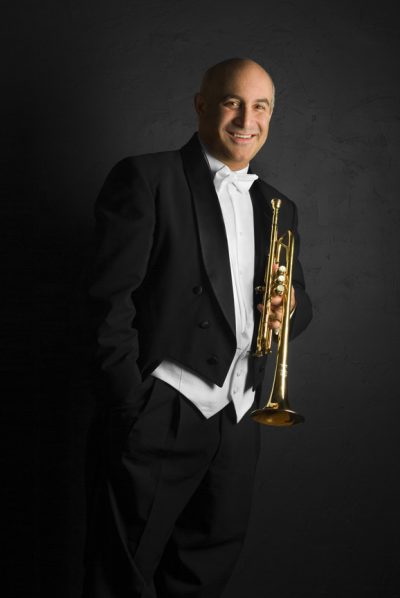 Michael Sachs is frequently featured as soloist with The Cleveland Orchestra. Among the twenty-four different solo pieces he has performed with the orchestra, highlights include the world premiere of John Williams’ Concerto for Trumpet, commissioned by The Cleveland Orchestra for Sachs, with Music Director Christoph von Dohnanyi conducting, as well as appearances as soloist at the Lucerne Festival, Salzburg Festival, and Carnegie Hall. Sachs has also performed as guest soloist with numerous orchestras and chamber groups, including the Houston Symphony Orchestra, the Louisiana Philharmonic Orchestra, the Auckland Philharmonia, the Reno Chamber Orchestra (where he recently made his guest conducting debut), and the Chamber Music Society of Lincoln Center. He can be heard on over 150 recorded works with The Cleveland Orchestra, as well as his recently released solo trumpet and organ CD, “Live from Severance Hall.” Sachs was also extensively involved in the planning of the National Brass Ensemble concert, recording, and DVD project for June 2014 involving music of Gabrieli, Copland, and a new work by John Williams. This project featured an unprecedented gathering of principal members of The Cleveland and Philadelphia Orchestras, Boston, Chicago, and San Francisco Symphonies, and New York and Los Angeles Philharmonic brass sections.

Along with his active performance schedule, Sachs serves as Chairman of the Brass, Woodwind, and Percussion Division, and Head of the Trumpet Department at the Cleveland Institute of Music. In addition to serving on the faculty of leading summer festivals, including the Aspen Music Festival, Domaine Forget, Grand Tetons Music Festival, National Brass Symposium, National Orchestral Institute, and Summit Brass, Sachs regularly presents master classes and workshops at conservatories and major universities throughout the United States, Europe, and Asia as a clinician for the Conn-Selmer Company (makers of Bach trumpets). At the invitation of Sir Georg Solti, he served as Principal Trumpet/Instructor in the Solti Orchestral Project at Carnegie Hall. He is the author of seven books including his most recent project, The Orchestral Trumpet, a 176-page comprehensive book and CD overview of standard orchestral trumpet repertoire. Sachs has also recently been extensively involved in the acoustic design and play testing for the creation of the new Artisan line of Bach Stradivarius trumpets.

Originally from Santa Monica, California, Sachs grew up attending public schools that emphasized arts and music. He played in everything from orchestras, jazz bands, and marching bands, to even rock bands (favorites included anything by Chicago or Earth, Wind, and Fire). He went on to attend UCLA, where he received a Bachelor of Arts degree in History before pursuing musical studies at The Juilliard School in New York.

Sachs first fell in love with Colorado years ago as a student at the Aspen Music Festival. He would later meet his wife, renowned harpist Yolanda Kondonassis, during a subsequent summer in Colorado, as well as getting married a few years later at the Hotel Jerome in Aspen. Ever since, Sachs has continued to spend many parts of his summers in Colorado. He has already felt the friendliness of the Yampa Valley and has grown quite fond of the Haymaker golf course as well as the many terrific restaurants that Steamboat offers. His fifteen-year-old daughter enjoys playing tennis, swimming, and hiking among the many outdoor activities that the area offers in the summer.

His vision for the festival includes bringing in a wide variety of instrumentation, giving the Strings audiences unique access to the highest caliber of musicians that this country has to offer in a broad range of entertaining musical and multi-media concert events. This includes bringing in concertmasters and principal players from the top orchestras as well as world renowned soloists and chamber musicians.

For more information on Michael Sachs, please visit his website at www.michaelsachs.com