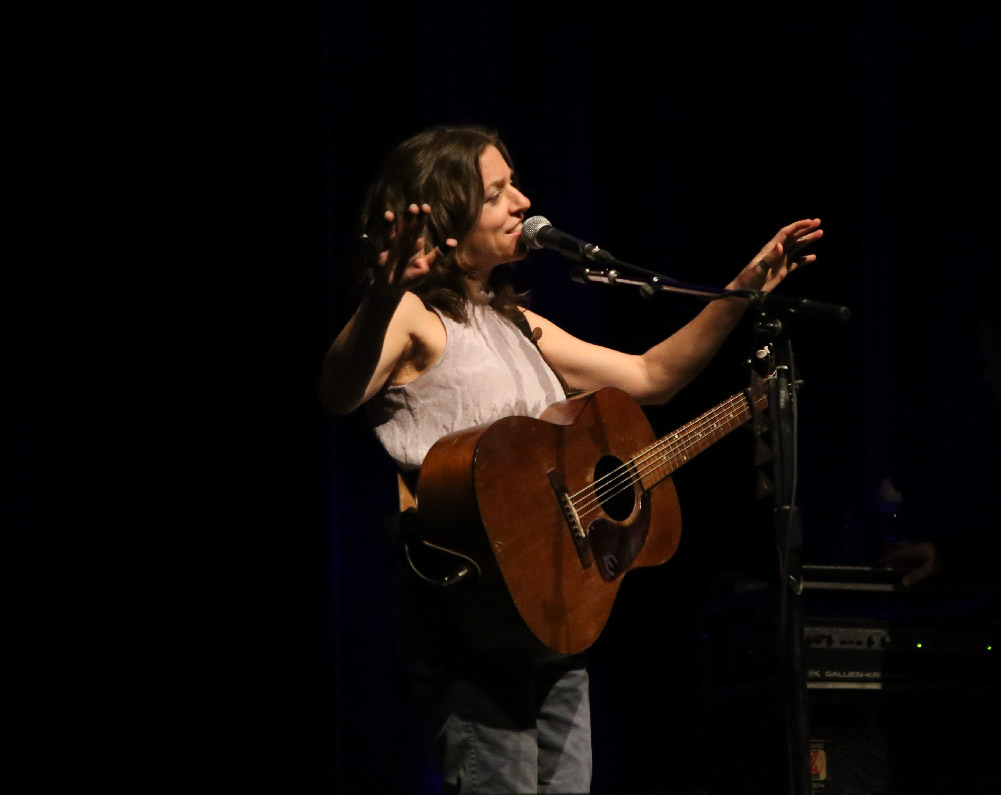 Ani DiFranco performed on the Strings Pavilion stage in February, 2020. Here is an excerpt from her new memoir (a New York Times Bestseller).

Performance in Times of Pain

It was Carnegie Hall, spring of 2002, and the sobbing from the third balcony was getting louder and louder until it began echoing around the room. Plus, she was not even the only one crying. A moment of paralyzing trepidation came over me and I heard my voice falter and begin to move into a distant slow motion. It was the culmination of so many recent moments of paralyzing trepidation. Having been in Manhattan on 9/11 (months earlier) and having breathed in the acrid blue smoke of the towers. Having hit the road mere weeks afterward when everyone else was canceling their tours and staying home behind closed shutters. I traveled around a country in a state of emergency. I played to half-empty houses that took months to slowly fill up again. I felt, all the while, a great pressure to lift up the small audiences that were brave enough to come out. A pressure to make sense of it all. To make hope happen.

I was confronted nightly with an impossible task: How am I supposed to make a whole show filled with all kinds of songs about all kinds of things when there is just one big thing pressing down on all of us? How could I possibly sing or talk about anything other than the all-encompassing panic in the air or the ominous march to war? And even if I could magically, suddenly make a whole show around this one looming thing, what the hell would I say? It was a challenging time to be a folksinger, at least, if you take your job seriously. …

I wrote and I wrote and I wrote and I wrote. On each stage, I unfolded a different permutation of a poem that came to be called “Self Evident.” I attempted to engage people directly with this poem in real time. But now here I was, laying a poem about 9/11 down on the very people who had shouldered the brunt of the violence, the brunt of the loss. It was Carnegie Hall, it was only seven months later, and I was alone on stage when the question of “How can I possibly talk about anything but this right now?” suddenly wheeled around and became “How dare you talk about this right now?” …

The spotlight was on me and there was no time to rethink my decision. I heard my distant voice finish reciting the poem. I think it may have even sung a few more songs. Then I was back in a dressing room full of smelly lilies and roses and there were pats on the back and congratulations- you- just- played- Carnegie- Hall hugs. Time inexplicably kept going.

I will never know what is the right balance in art between painful truths and painful silences. There is no right balance to be known. It is a question to be asked of every moment and its answer pertains only to that moment and no other. It’s the spontaneous deal we strike with others, the conversation or lack thereof. Having played my part every which way, I’m not even sure what I’d recommend. I just know that we need to be willing to make mistakes. I know that we need to allow for our differences. I know we need to forgive each other.

From No Walls and the Recurring Dream by Ani DiFranco, published by Viking/Penguin.
©2019 by LFS Touring, Inc. Available in print, e-book, and audio at penguinrandomhouse.com