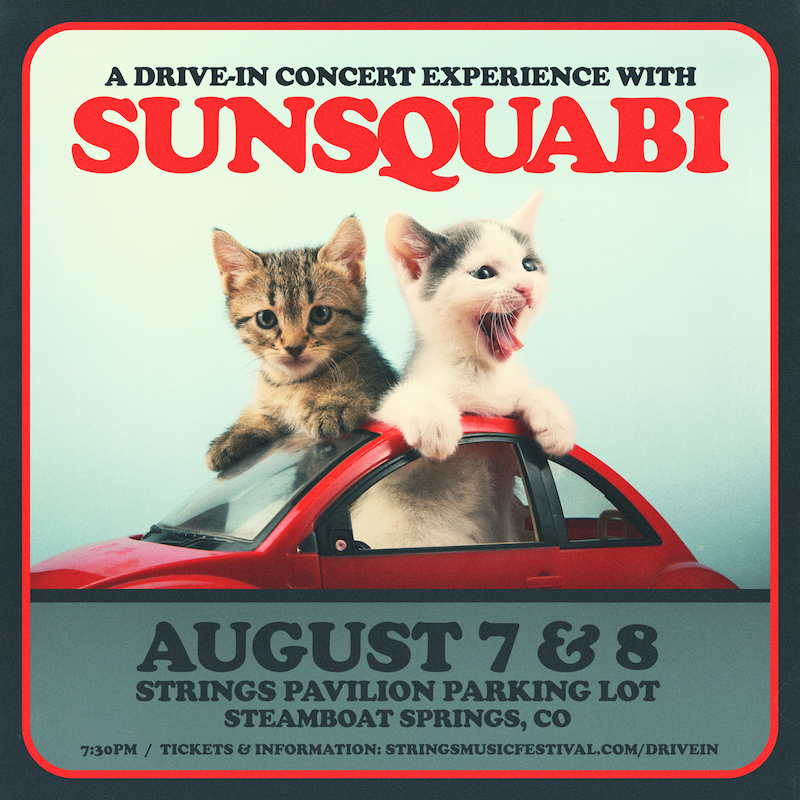 EVENT HAS CONCLUDED – IF YOU WERE THERE, THANK YOU FOR ATTENDING!SOLD OUT!Two nights with different sets each night! A

EVENT HAS CONCLUDED – IF YOU WERE THERE, THANK YOU FOR ATTENDING!
SOLD OUT!
Two nights with different sets each night!

A drive-in concert experience from Strings Music Festival!
Click here to read details on our Drive-ins.

There’s a place, deep in the cosmos, where jam bands and electronic dance music intersect with rhythm-driven funk. You’ll feel like you’re floating but not lost completely to atmospheric elements. Instead, you’re tethered to an avant-garde spaceship with Colorado-based SunSquabi on the frequency. This cosmic wonderland is a melting pot of musical genres that just might represent the future of music.

SunSquabi has been catching the eyes and ears of music fans around the world with their ever-evolving sound in the studio and on the live stage. SunSquabi has gained national attention for their unique way of producing music. The band’s live show can be described as an ‘Electronic Hydro Funk Experience’ that is different every single time out. SunSquabi continues to break down and analyze the expectations of what a “live-electronic” band should be. The band unveiled their newest album Instinct in January of 2019. The 10-track LP finds the band at their highest peak as they have been dedicated to capturing live performance elements in the studio. It’s a metamorphosis as improvisational jams flesh out into full-blown songs that become staples in their repertoire.

Combining the talents of Kevin Donohue (guitars/keys/production), Josh Fairman (bassist/synth), and Chris Anderson (drums), SunSquabi is a disciplined and structured group. It takes a seasoned musician to stay in the pocket for the sake of building well-developed lines and climaxes. To do that seamlessly requires patience and skill. “It’s kinda like breathing,” says Donabhue. “We can communicate directly with each other both verbally and non-verbally, onstage and off. That connection will take the music collectively where we all want to go.”