An Evening with the Wood Brothers

An Evening with the Wood Brothers 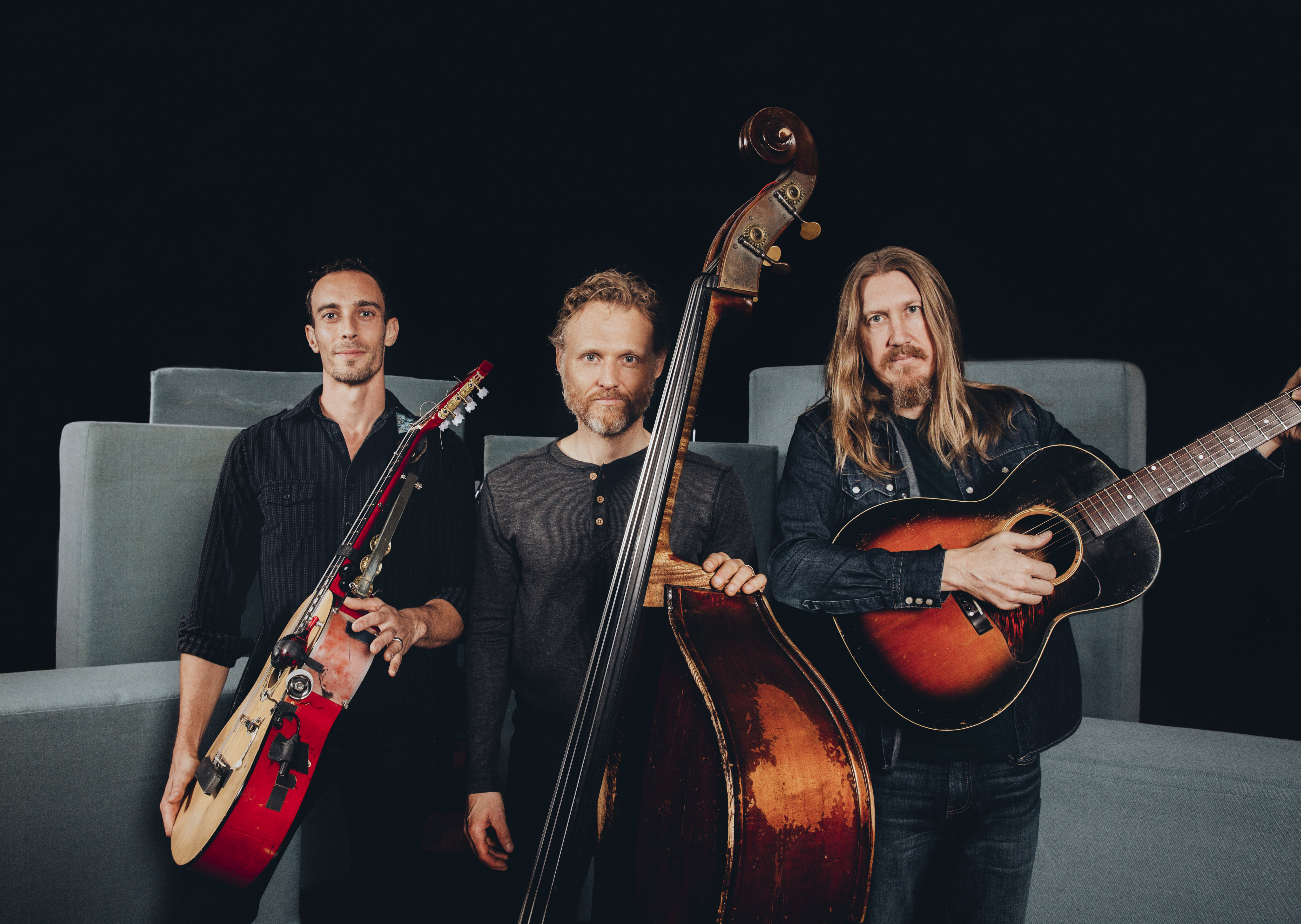 The Wood Brothers’ sixth outing, One Drop of Truth, dives headfirst into a deep wellspring of sounds, styles, and influences. Whereas their previous outings have often followed a conceptual and sonic through-line, here the long-standing trio featuring brothers Oliver and Chris Wood along with Jano Rix treat each song as if it were its own short film. The plaintive, country-folk of the album’s opening track “River Takes The Town” gives way to The Band-esque Americana soul of “Happiness Jones.” The wistful ballad “Strange As It Seems” floats on a cloud of stream of consciousness, standing in stark contrast to “Sky High”—a Saturday night barnburner built upon stinging slide guitar funk. “Seasick Emotions” is rife with turmoil, yet “Sparking Wine” is jaunty and carefree. The end result is undeniably The Wood Brothers’ most dynamic recording to date.

“Often, when you’re making an album in the traditional way, there will be a unifying concept, whether that be in the approach to the music stylistically or lyrically in terms over the overall narrative. And even though there are some themes that revealed themselves later, this one is all over the place,” explains Oliver Wood. “What I really love about this record is that each one of these songs has its own little world. There are diverse sounds and vibes from one track to the next.”

Building off the success of their previous studio album, 2015’s ‘Paradise,’ which was dubbed “the warmest, most sublime and occasionally rowdiest Wood Brothers release yet,” by American Songwriter, the band found themselves at a fortuitous crossroads. Following a tour with Tedeschi Trucks Band, high profile festival dates and sold out headline shows, the band felt free from the cyclical album release, tour, write, record and do-it-all-over-again pressures of the traditional music business. With all three members living in Nashville affording easy access to each other and a wealth of local independent studios at their disposal, they started work in January of 2017 with a new approach.

“Instead of going into one studio and recording it all at the same time, we picked a couple of studios, and started to experiment,” says Chris Wood. “Sometimes we’d just make demos of songs to see if we got anything we liked. There was no pressure, and that really freed us up. We just did one or two songs a day, put it aside, let the songs simmer, and then we’d have a fresh perspective on what was working or not working. You need time to go by to gain objectivity.”

The band extended this approach to the mixing process, sending tracks to four different mixing engineers, each selected based on what the song demanded. Scotty Hard (who’s worked extensively with Medeski Martin & Wood, among others) was recruited for the “edgier, funkier tunes,” “Sky High” and “Happiness Jones.” Mike Poole (who worked on The Wood Brothers album ‘The Muse’) mixed “Sparkling Wine” and “Strange As It Seems.” Their old friend Brandon Belle from Zac Brown’s studio Southern Ground took on “Laughin’ Or Crying.” The remainder of the album was mixed by Grammy Award-winning engineer Trina Shoemaker, especially sought after by The Wood Brothers for her work with Brandi Carlile.

While the songs on ‘One Drop of Truth’ achieve the goal of standing on their own, a few common themes did, inevitably, emerge. Water—whether in a teardrop, a storm, a river or a libation—was being used as a metaphor in the search for truth and happiness. Chris Wood’s “Seasick Emotion,” one of two songs he sings on the collection serves as a prime example: “All the blue sky is gone / How can I get out of bed / This hurricane in my head / I’m just a boat in a storm / How can I know where to go / When everything that I know / Is already lost in the wind.”

“That one was written last fall during a hurricane, while at the same time the election was coming up, and there was all this crazy energy in the world,” Chris reveals. “I definitely got swept away emotionally by everything that was going on.”

Album opener, “River Takes the Town,” takes on both figurative and literal meaning. It was completed just as a series of hurricanes were decimating parts of the U.S.: “It’s been a few days since I heard any word from you / and I don’t sleep easy, I don’t sleep easy / and the rain keeps comin’, the rain keeps comin’ / nothin’s ever for certain / ’til the levee breaks down / the water comes in and the river / the river takes the town.”

“I remember hearing a news story about a flood in Shreveport, and I wrote the line ‘I hope the levee in Shreveport does what it’s supposed to do,’” explains Oliver. “I was writing literally, at first, about how scary it must be when people lose power and communication with those they love. But then the lyrics became a metaphor for something more interpersonal. And by the end of this summer, it seemed to take on new meaning yet again.”

Though emotional struggle is a recurring thread, so is the comforting truth of how much wisdom comes from the hard times. The song “Happiness Jones”, was based on a news article Oliver read about how our society is addicted to happiness, antidepressants, and the distorted “happy” reality social media can depict. As a result, people feel like it’s unnatural to be sad, yet. sadness can be a gift: “All of my wisdom came from all the toughest days / I never learned a thing bein’ happy / all of my sufferin’ came / I didn’t appreciate it / I never learned a thing being happy.”

While the majority of ‘One Drop of Truth’ was written and recorded as a group, the standout track “Strange As It Seems,” described by Chris as, “a classic Oliver song,” was an exception.

“I had recorded it a couple months before Chris and Jano added their parts, so I was excited to see what they would do with it. We talked a lot about it having a dreamlike quality to it. Chris has all these cool sound effects that he can make with the bowed bass, and then Jano played the melodica and the piano on it, and they added exactly the atmosphere that it needed,” explains Oliver. “Conceptually, I almost think of it like a Tim Burton movie, where you go to sleep, and you go into this dream world, to meet your lover, but you do so with purpose. You bring your wallet,you get dressed up, you’re going on a date. The idea being, that you rendezvous in the dream. One of my favorite things about any song is ambiguity, leaving it open to interpretation. Maybe the man and woman in this song are already married, and they’re on separate sides of the bed, and they’re disconnected, so they’re hoping to find a better version of a partner in their dreams. Or, maybe they are two lonely people, in separate places, finding each other in this dreamworld. But at the end of the song, the guy wakes up, and he goes down to the kitchen, and he’s with his wife and it’s a beautiful thing, and they dance in the light. So perhaps there’s also an element of hope, whether they’re lonely, or they’re disconnected, there’s still a connection there, sometimes you have to go to that other level to realize it.”

Fittingly titled, ‘One Drop of Truth,’ the latest entry in The Wood Brothers evolution finds three musicians being true to themselves. At a point in their career where most artists would be looking to strategically position themselves for even greater commercial success, they instead turned to artistic expression in service of the muse. In chaotic times when honesty is in short supply and ulterior motives seem to always be at play, The Wood Brothers put faith in themselves and ultimately their audience by writing and recording a collection of songs that is honest and pure. As they sing on the album’s title track: “Rather die hungry / than feasting on lies / Give me one drop of truth / I cannot deny.”

Please note: $1 of the ticket price goes to a charity chosen by the artist.

Tickets start at $46, $1 of the ticket price goes to a charity chosen by the artist